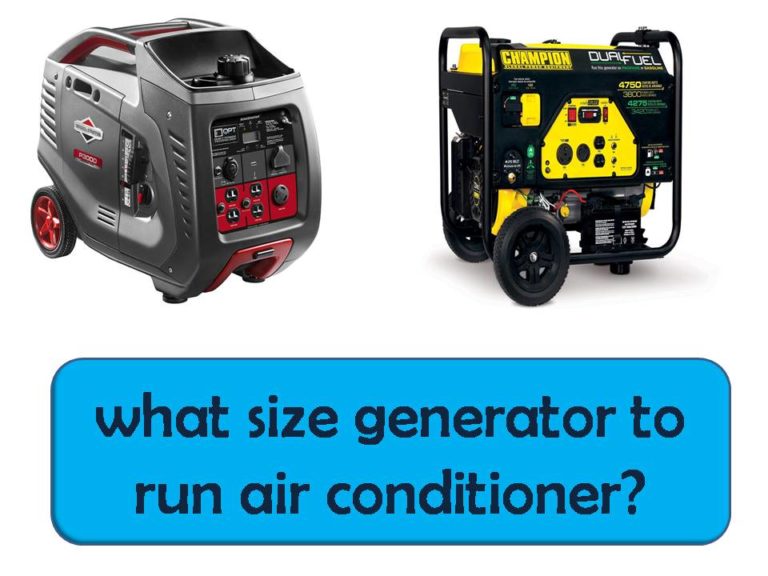 Generators are often used to meet the increased peak load of occasionally used appliances like an air conditioner. The next question for many is what size generator to run air conditioner units would be needed and the type of AC you want to use.

We start with swamp coolers, also known as [easyazon_link identifier=”B00ILRBRQU” locale=”US” tag=”aquapponics-20″]evaporative coolers[/easyazon_link], because they use the least power. They blow warm dry air through a pad soaked in water, creating cooler, damp air. A small standard 115 volt swamp cooler plugged into a wall outlet will need around 160 Watts of power. There is some energy loss through a converter. Expect to need at least 150 Watts to run the minimal fan blowing air through a small screen.

If you decide to make your own swamp cooler by putting wet cloth over a fan, know that the portable fan needs about 120 Watts to start and 40 Watts to run.

A compact, energy efficient air conditioner is rated for 13,500 to 14,000 BTU. In theory, [easyazon_link identifier=”B01M3R711N” locale=”US” tag=”aquapponics-20″] a 2800 Watt generator[/easyazon_link] can handle the steady load, though some RV ACs have a 3000 starting watt load. However, air conditioners draw a lot of power to start up the unit, so you need 3500 Watts of peak power or continual power to handle the startup.

A 3500 Watt generator could handle the startup of the AC and continue to power it. The running load will drop to 1800-2000 Watts. You could then plug in several smaller items into the generator while still running the air conditioner.

In short, a 3000 Watt generator is a minimum to run this size of air conditioner, and 3500 Watts is recommended.

A 15,000 air conditioner can cool down a larger RV or more rapidly cool off the RV. These RV air conditioners have between 3300 and 3500 starting watts. They’ll need around 2000 Watts to continue to operate, though some efficient units need as little as 1800 Watts to operate.

One option for powering an air conditioner like this is to connect two, 2000 Watt RV generators in parallel. Another option is buying [easyazon_link identifier=”B00C113134″ locale=”US” tag=”aquapponics-20″]a 4500 Watt to 6000 Watt generator[/easyazon_link]. The generator will be powerful enough to handle the starting load of an air conditioner, refrigerator and a couple of other appliances.

Be careful when shopping for generators, since a generator with a maximum load of 2000 Watts will have a running (continuous load) of around 1600 Watts. Two of these generators in parallel could power a 13,500 BTU AC but may struggle to meet peak demand at startup.