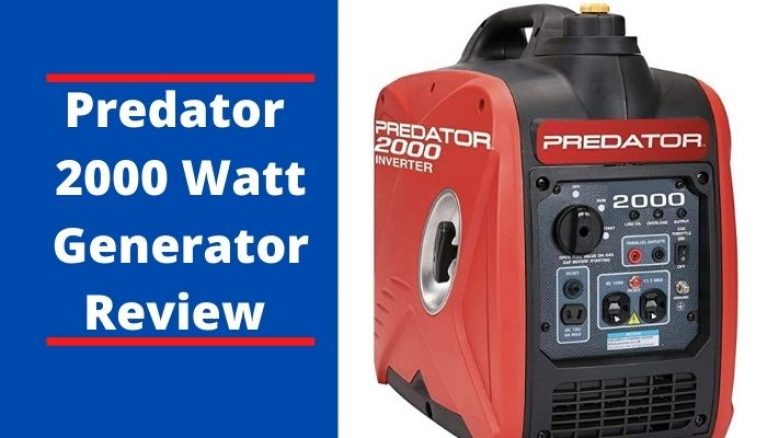 Points in Favor of the Predator 2000

The Predator 2000 generator can be set up in parallel with another equally powerful Predator generator. The downside is that you have to buy the parallel connection kit separately. Connect 2 in parallel, and you’ll get up to 4000 watts of surge power. It has a base load of 1600 watts.

The surge capacity enabled by the inverter built into the generator is 2000 watts. Yet we can’t say that this generator is deceptively marketed, but it is common for generators to be advertised based on peak capacity, not running capacity. Two generators will then run a 3000 watt base load without any problem. Note that not all generators can be connected in parallel like this.

The unit has two basic 120 volt outlets. Fortunately, they’re grounded. (Not all are.) It also has a direct current 12 volt outlet perfect for running your RV’s key systems. Its power output is roughly 13 amps. You can use it to run small appliances, but it can’t run heavy duty power tools. However, voltage is steady.

This generator is a good choice for campers or RVers. It is rather compact and roughly 22 inches by 13 inches by 19 inches. It will fit in most cargo holds. Just don’t run it in your storage bay, because it needs the same good ventilation as any other generator. The Predator 2000 weighs just under 50 pounds without fuel in it. That’s fairly average for this generator class. Yet it does meet EPA III and CARB standards. That means you’re allowed to take it into California state parks and national parks.

It has a rugged protective housing. The generator itself is fully enclosed. Note that there is no wheel kit, so you’ll be carrying it via the carry handle or putting it on a wagon or trailer to transport it.

Strikes against the Predator 2000 Generator

The Predator 2000 relies on a recoil start. You’ll be pulling the cord until it starts. If the recoil starter springs break or wear out, it is difficult to get replacement parts. It uses conventional oil but changing the oil is an awkward process. The manufacturer says it needs to be started up and run for a while every two months, but that’s a standard maintenance task for small generators.

The generator has an economy mode where it puts out less power but uses even less fuel. This is a good way to save on fuel if you’re running a partial load. The problem is that the generator sometimes fails in that mode, especially if you haven’t connected a load to it. This creates issues when you’re turning on the generator before you’ve connected appliances to it.

The generator itself has average to below average fuel efficiency. The manufacturer touts it running four to six hours on a full tank of gas. However, that’s at a half load. Expect to refuel it every two to four hours if carrying a full 1500 to 2000 watt load.You should know about the operating process of a generator.

Observations about the Predator 2000

This Predator 2000 generator review would not be complete without a full list of issues and concerns. Yet there are matters that aren’t a clear pro or con but require mentioning.

There is no propane conversion kit for this generator, but that’s not a common option for gas generators. It runs on standard unleaded gasoline. Sometimes the two piece gas line itself leaks. If that occurs, don’t use the generator because it is a fire hazard.

At 65 decibels, it is as noisy as the average generator in this class. Note that this is a rating assuming it is ten to twenty feet away, so it will be even louder if it is right next to your RV.

This budget generator has a number of basic protective systems. For example, it has an electronic overload protection circuit. The low oil indicator is standard, but it can hold 12 to 13 ounces of oil. That’s more than many other generators. Unfortunately, it sometimes leaks oil. The risk of oil leaks increases with run time. For example you’re more likely to experience a blown gasket if you run it continuously for several days. If you run it for more than a few hours on a hot day, it may overheat, too.

This is an inverter generator. In theory, that evens out the peaks and valleys in the DC power so that you can safely charge a smart device. This generator doesn’t have USB plugs for plugging in smart devices. Nor does the manufacturer say it has sufficient power quality to safely charge a smart device. You can plug your laptop charging cable into the generator, but you may want a power regulator or surge protector on the line to protect sensitive electronics.

There is no complex control panel or display. On the other hand, you don’t have a computer board inside the generator that can malfunction because the battery has low power or simply got wet. The simplicity of the design is part of the reason why they can sell this generator at such a low cost.

This is an affordable, compact, RV friendly generator. This generator is best kept for infrequent use like supporting an RV off the grid for a few hours or running equipment at a tailgating party.